Abstract: When we read a poem, especially in English, today’s world confronts us with the question of the accent that manifested in the poet’s mind while composing. When a Hong Kong child writes her heart out, is she to be silenced into a British accent where her rhymes break down and the tonal melodies of her English reduced to binary contrasts of stress? The scale enlarges to the whole territory’s literary voices, and to Singapore, India, and Philippines. The case holds wherever English is introduced and de facto indigenized, despite the authority’s constant yet otherwise inclined efforts.

This paper demonstrates the tonality of Hong Kong English which gives it a prosody profile quite unlike its antecedent languages such as Cantonese or British English. The systematicity of the tonal patterns precludes the dismissal of Hong Kong English as sub-standard. By apprehending these patterns, we enable the inner voices of a community and its literary youths that would otherwise have been silenced by blind aspiration to language models that are effectively foreign, which also puts the spotlight on the need to understand linguistics for a meaningful grasp of literature.

We also hope to trigger more thoughts on the consequences of treating Asian varieties of English as the English in terms of social identity and cultural cohesiveness. The impact of such treatment would resonate through the language and educational policies as well as the social fabric of each community that claims English as a language.

As of English, in the advent of the popularity of Standard Chinese, we might continue to be threatened by the tyranny phonological distortion unless one learns, through linguistics, how to hear the inner voices of the poets.
.
.

Abstract My presentation argues that core concepts of the ethical literary criticism emerged as humanity underwent two important processes during the history of human civilization: Natural selection and Ethical selection. Natural selection constitutes a biological selection differentiating human beings from other animals in their physical forms; while ethical selection allows human beings to distinguish their cultures from the animal kingdom in the sense that they have acquired ethical consciousness. Theoretically speaking, humanity embraced what may be called the “Sphinx factor” or outcome, as a combination of human and animal factors that emerged to determine the ability of human consciousness to make ethical, rather than natural, choices. The Sphinx factor, I argue, is the central element represented in several literary works.

Abstract Why does Hamlet always hesitate when avenging his dead father after learning the truth of his murder? What are the problems leading to Hamlet’s indecision when exacting vengeance? In my presentation, I will argue that we may attribute Hamlet’s indecision to the converging action of ethical taboos against matricide, patricide, and regicide. From the soliloquies of Hamlet (such as “to be or not to be” and “the mousetrap”) it is apparent that Hamlet’s awareness of the ethical taboo against revenge stays his hand when seeking retributive justice against his stepfather, Claudius, and his mother, Gertrude. What, then, may Hamlet actually do given these competing imperatives? I argue that the Prince of Denmark ca, in fact, do nothing–except entertain the dilemma of the ethical choice itself. His posture requires hesitation because he cannot find a way to resolve his ethical impasse.
.
.

Abstract: Does the language of men and women differ, or are age and social status more important variables? Have these differences become smaller over time, as gender roles have become less rigid?

In this talk I will report the results of a study that investigated how age, gender, social class and dialect influence how frequently speakers of British English use intensifiers (e.g. very) in private conversations and whether this has changed over the last two decades. With data drawn from over 600 speakers and 4 M. words included in the British National Corpus 1994 and 2014, it is the most comprehensive study of intensifier usage to date, taking into account 134 intensifier variants. Results show that, in most age groups and social classes, men use intensifiers less frequently than women, and gender differences have diminished to a very limited extent, notably for the middle class. Moreover, intensification rate has increased across the board over time. This could be due to a shift towards a stereotypically more feminine communicative style as the perception of gender roles has changed, a process by which the middle class might have been particularly affected.
.
.

Abstract: This talk presents a transformational approach to teaching and learning in a second language context. By way of explaining the principles of a General Education course which uses sporting themes as its content, I illustrate the conceptual underpinning of content-based course design. These principles include: selecting interesting content, encouraging learner autonomy, valuing student participation, and using a progressive teaching pedagogy. I explain the course development process and how programme evaluation research can form part of the ongoing course development. Then, using data obtained from students who participated in the General Education course, I illustrate the benefits of having students learn through sustained content.
.
.

The Private Artist in the Public World:
Reading and Conversation with Madeleine Thien

Description: Madeleine Thien will read from her 2016 novel, Do Not Say We Have Nothing, about musicians studying Western classical music at the Shanghai Conservatory in the 1960s, and about the legacy of the 1989 Tiananmen demonstrations. The novel won both the Governor General’s Award and the 2016 Scotiabank Giller Prize, and was shortlisted for the Booker Prize. Her other fictions includes the novels Dogs at the Perimeter (2011) and Certainty (2006), as well as the short story collection Simple Recipes (2001). Her essays and criticisms have appeared in academic journals and in The Guardian.
.
.

Abstract: Dr. Gillian Bickley, Associate Professor for 22 years at the Department of English Language and Literature at Hong Kong Baptist University, will talk about writing creatively, its motives and rewards. She will introduce two international prizes, founded by her husband, Dr. Verner Bickley, MBE and herself, which offer publication as a prize for work submitted in English. She will also introduce several of the writers whose work has been published as a result of entering for the Proverse Prize, suggesting lessons for those wishing their creative work to be published.

Dr. Bickley will bring to the seminar examples of some of the winning book-length entries.
.
. 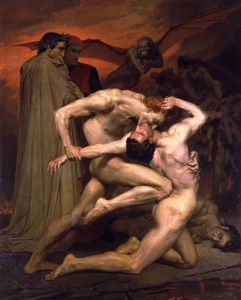 “Dante and Virgil in Hell” (1850) by William-Adolphe Bouguereau

Abstract: As the discourse of progress and history continues to sweep over the globe and impose its authoritative (re)organization of temporal experience, there is a no less global and persistent resistance to time’s perceived irreversibility which at once sustains and plagues the modern condition. The Gothic, with its roots deeply grounded in experience of time, provides a site where the flow of time is not necessarily linear, productive or irreversible, whether it is of an antiquated setting – dilapidated mansions, haunted castles – where time refuses to move forward, or ghosts issuing from another time to haunt the present, thus offering an effective counter-discourse to the unrelenting chronometry of linear progression. As is in its characteristic hybrid nature, the Gothic is highly amenable to the queer in their shared impulse to destabilize notions of normativity. Since uncertainty and anxiety are essential to the genre, the Gothic’s flirtation with homoeroticism, affinity for sexual ambiguities, and its play with innuendoes and metaphors combine to demonstrate a deep bond with the queer, especially when taking into account the temporal turn in queer scholarship. In this Talk, I will read Randall Kenan’s queer gothic fiction A Visitation of Spirits (1989) to discuss how queer temporalities and the temporalities in Gothic narrative inform each other in their co-articulation of queer subjectivities, and how they enfranchise alternative views of time, history, and relationalities.
.
.

Abstract: Drawing from previously unpublished materials, I argue that prior to and following the Second World War case agents at the Federal Bureau of Investigation (FBI) engaged in literary-minded interpretive practices which subsequently became a commonplace of the American surveillance state. Interpretive communities of authority, backed by emerging technologies, sought to create near evidentiary “realities” out of what were merely literary tastes and ideological propensities. As privileged readers who constructed their own canons out of published materials, deemed acceptable or unacceptable, FBI case managers “close-read” literary materials for evidence of political subversion. Buoyed by the ad hoc submission of data delivered along networks of enthusiastic volunteer informants nationwide, such interpretive communities, formal and informal, imposed strikingly narrow (statist) regimes of literary preference. At the same time, officials at the FBI enforced modes of censorship over and against views deemed subversive in the mainstream culture. The Bureau thus alternated between the selective suppression of information revealed as a consequence of investigation and its opportune release when delivering classified, confidential, or otherwise inaccessible information to the public for the purposes of securing indictments in congressional subcommittees. The FBI archive was purpose-built to serve preferred regimes of interpretation—even, or especially, prior to the moment of lawful investigation.

Abstract: This talk presents some of the outcomes of a multi-year collaborative research project on Chinese women’s magazines, in which the speaker was one of the participants. The talk will introduce especially the digital humanities component of the project, which resulted in the production of a unique online database. Attention will also be paid to a specific case study involving the female magazine editor Gao Jianhua and various editing projects she was involved in throughout the 1910s-1930s.
.