Peter Gordon, publisher at Chameleon Press and editor of the Asian Review of Books, has been involved with books and literature in Hong Kong for almost fifteen years. He was a founder of Internet bookseller Paddyfield.com; the Hong Kong International Literary Festival ran out of this office until 2007. He established the Man Asian Literary Prize in 2006 and guided it for its first two years. Since then, he has assisted the HKTDC ramp up the English author programme at the annual Hong Kong Book Fair, and has written several plays for local production. He has a degree from Harvard College.

Monday 27 January 2014
‘Language in the Eye of the Beholder: Approaching Linguistic Variety with the Notion of Norms’

Vinton Poon obtained his PhD from the University of Edinburgh in 2011, researching the linguistic norms of Hong Kong English on the Internet. His academic interests lie within the broad field of language and identity. He is keen to understand how people’s construction of personal and national identities has an effect of the form of language they use, and how the form in turn affects their identity construction. Before becoming a lecturer in the Department of English Language and Literature at Hong Kong Baptist University in 2013, he worked as an assistant professor at the Caritas Institute of Higher Education.
.

Monday 24 February 2014
‘Robinson Crusoe: Man is an Island in the Archipelago of Modernity’

Mark Wallbanks obtained a B.A. in English Literary Studies with Philosophy at Middlesex University, England and an M.A. in Anglophone Literatures and Cultures at The University of Potsdam, Germany. After graduating with his B.A., Mark taught English in France for a number of years before moving to Germany where he continued teaching while pursuing his M.A. He is currently writing his PhD at Hong Kong Baptist University, taking a tropological approach to how notions of the authentic self have travelled through literature from the modern to the postmodern era. Areas/authors of research interest include Milton, the early English novel, Joseph Conrad, Henry Miller and Bret Easton-Ellis.
–

Born in Singapore, Eddie Tay is Associate Professor teaching courses on creative writing and poetry at the Department of English, Chinese University of Hong Kong. He is the author of three volumes of poetry. His first book of poetry, Remnants, consists of renditions of mythic and colonial history of Malaya as well as a homage to the Tang Dynasty poets Li Bai, Du Fu and Li He. His second volume of poetry, A Lover’s Soliloquy, extends his interests in Tang Dynasty poetry through renditions of the erotic poetry of Li Shang-yin. It also explores the language of eroticism in the modern city life. His most recent collection is The Mental Life of Cities, a winner of the 2012 Singapore Literature Prize. In it, he experiments with bilingual (English-Chinese) poetry. He has also written a scholarly book entitled Colony, Nation, and Globalisation: Not at Home in Singaporean and Malaysian Literature. He is the Reviews Editor of Cha: An Asian Literary Journal. His recent experiments with poetry alongside his own photography can be found at Asiatic.–

Jason E. H. Lee has a PhD from the University of Hong Kong and an MA in Postcolonial Literary and Cultural Studies from the University of Leeds. His research interests include cosmopolitan and global fictions, contemporary poetics and poetry, and postcolonial and diasporic Asian writing. His poetry has been published in journals like Cha: An Asian Literary Journal, and he has been a finalist for numerous international prizes, including the Melita Hume Poetry Prize (2012) and the HKU Poetry Prize (2010). He is currently awaiting publication of his first book of poems, Beds in the East, and is working on a monograph concerning critical cosmopolitanism in contemporary fiction. He is a Lecturer at the Department of English at Hong Kong Baptist University.
.

Lucas Klein is a writer, translator, and editor whose translations, poems, essays, and articles have appeared at Two Lines, Drunken Boat, Jacket, CLEAR, and PMLA. A graduate of Middlebury College (BA) and Yale University (PhD), he is Assistant Professor in the School of Chinese at the University of Hong Kong. With Haun Saussy and Jonathan Stalling he edited The Chinese Written Character as a Medium for Poetry: A Critical Edition, by Ernest Fenollosa and Ezra Pound (Fordham University Press, 2008), and with Clayton Eshleman co-translated a collection of Bei Dao 北島 poems, Endure (Black Widow Press, 2011). His translation Notes on the Mosquito: Selected Poems of Xi Chuan 西川 (New Directions, 2012) won the 2013 Lucien Stryk Prize for Asian poetry in translation and was shortlisted for the Best Translated Book Award in poetry (for more, see http://xichuanpoetry.com). He is at work translating Tang dynasty poet Li Shangyin 李商隱 and seminal contemporary poet Mang Ke 芒克. 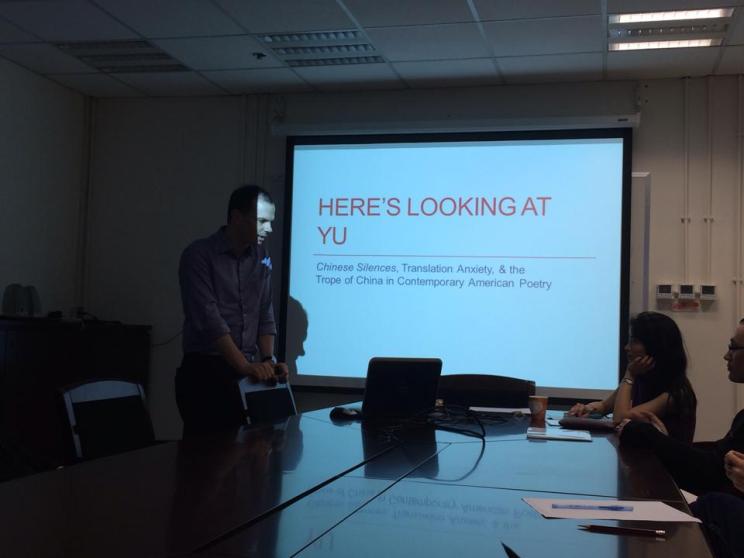